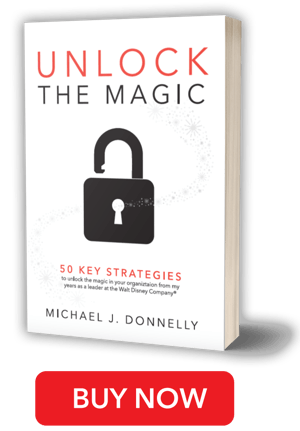 Unlock the Magic highlights the lessons Michael J. Donnelly learned over a decades-long career at the Walt Disney Co.

From his first day as a Disney cast member, Michael J. Donnelly had a frontline seat on delivering a customer service experience that turns customers into loyal fans and advocates. Whether he was working as an attractions and guest relations host, hiring new cast members, or leading frontline cast members at different Disney resorts, the author learned key business strategies that differentiate the Disney experience—for customers and employees alike. The greatest leaders in the world—religious, corporate, political, familial, or educational—capture the hearts and minds of their audience through well-crafted and strategic stories. They also develop fresh, new language to communicate with customers and employees in meaningful ways. Build engaged teams, stand out from competitors, and implement effective change throughout your organization by unlocking the magic.

PREFACE: A Note from Mike...

It was 8:58 a.m. on a cool Florida morning in January, and I was about to be late for my first day of work at the Walt Disney Company. Thankfully, I found a rare parking spot up front, set the brake on my four-speed Chevy Chevette, and began a quick jog toward the building. I was a typical eighteen-year-old on an adventure trying to figure out life. Little did I know that this day would change the course of my life forever.

Unlock the Magic is all about the lessons that I began to learn on that very first day of work as a Disney cast member. I have learned and grown from my thirty-plus-year affiliation with the Walt Disney Company, and I am grateful to the entire Disney organization for their partnership. Over the years, I have had the privilege to work in the Disney parks as an attractions and guest relations host. I have hired new cast members as a casting employment interviewer, and I have led frontline cast members at three different Disney resorts. In each of those positions, I have taken away key leadership strategies that I feel truly differentiate the Disney guest experience.

This book lays out the most impactful of those strategies though my eyes in “Key Takeaways” at the end of each section. My hope for the reader? To inspire action. To adapt and implement any strategy that they find valuable for their organization. To do something different as a result of reading this book. Because as a senior Disney leader once told me, “Mike, one thing is for sure: if we keep doing what we’re doing, we’re going to keep getting what we’re getting.” To the extent that you find value, make these strategies your own. In fact, I have laid out the book with room for you to make notes and rank your implementation excitement by circling a number from 1 to 5, where 5 means “We should do this yesterday!” and 1 means “Maybe we should consider this in the future” or “we already do this well.” In the end, the goal is to have a marked-up, customized workbook full of valuable, actionable strategies for your organization.

All the best to you and your organization. Carpe diem!